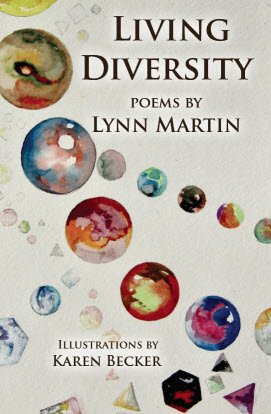 “The themes of wonder, love, and acceptance run through your poems in Living Diversity. You have created a kind of alchemy by discovering beauty within sadness, love within all experiences and always grounding us in the steady rhythms of the natural world. Thanks for bringing such a positive thought form to us at a time when we truly need it.” — Cynthia

The way it is

Think of the hair on their sweet heads.
One black as the eye of midnight,
soft to the touch, without curl.
Another blond, scruffy with impossible demands.
The youngest tightly wound and bristling.
Two boys and a girl. An American mix.

And think of the points of arrival.
Bucks County with acres of rich farms
as far from the Philippines as anyone can imagine,
and yet, here is my first born transferred from
Pearl Buck’s arms to my own.
Second son is pushed out from my own body,
surprised by the brother already in residence.
Their sister, years later, football shouldered,
African songed: a family.

While nations divide one race from another,
three children call each other brother, sister.
Their questing eyes do not ask the rightness
of this. Children learn what they see.

I hear their laughter as they discover
the pond down the road, the mystery
of apple trees whose limbs invite like ladders,
hay stacked for hiding and finding. Years
later I ask second son if he would have preferred
to be an only child. He doesn’t deign to answer,
only searches out his older brother who is teasing
his sister, and inserts himself between them.
His hand reaches out to them,
seeking comfort in the known.

Oh dear what can the matter be

No fair, I can’t go to the fair

Because something I can’t see

Is floating around in the air

Even while my world is falling

He promised to bring me blue ribbons

To tie up my hair

But why tie up my hair

When I can’t go anywhere

The sky is falling

“we have one another now and then”

Is that true Grace
are you listening

Twined round a branch like an airborne root,
the boy looks down from three branches up.
He is not about to descend.
Certainly not to this white woman’s command.
She thinks he will fall.
He looks down on her with disdain,
continues to climb & climb & climb.
Isaiah is five years old and already he knows

the only way is up.

Yes, Wendell, I am on my way

I will secede
from the government of money and war
from the government of division
from a fear of oneself translating into a fear of the other
I ask everyone to hold with Mr. Berry
in the open farmland, the deepest woods
the highest mountains, the quietest lakes
Yes, yes, I will hold fast against a river of money
designed to benefit only the rich
I will call everyone neighbor, call and call all people
to stand beneath the stars that belong to everyone.

All poems copyright © 2018 by Lynn Martin. All rights reserved.