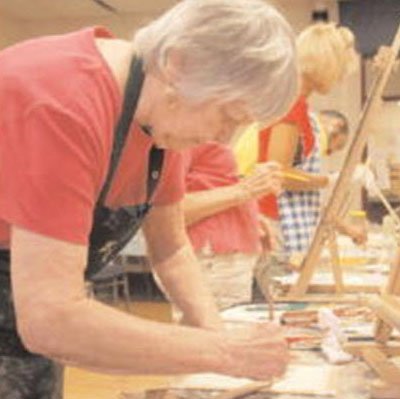 Here’s the thing about Lynn Martin:

She’s a mother, a grandmother.

She wishes she were a skateboarder, like the kids who jump and fly outside her Westgate apartment in West Brattleboro.

She was a great ball player when she was a kid, even though she wasn’t allowed to play Little League.

She still walks with the strength and grace of an athlete, though she feels her age, and doesn’t much like the aches and the slowing down.

She won’t call herself a painter yet, but her oil paintings decorate most of one whole wall in that cool, quiet apartment.

She grew up in New Jersey. Her father was a bookkeeper in New York City and her mother worked in the cafeteria in the Prudential building in Newark.

Everyone in her mother’s family worked in factories. Lynn was the first on that side to graduate from high school, which she did at 17. She worked in a linoleum factory for a while, until a woman sitting next to her at lunch mentioned that she was going to college.

“How much does it cost?” Lynn asked.

The woman told her, somewhere around $100.

“Where are you going?”

“Well, I could do that,” Lynn thought. And did.

She taught first and second grade after graduation, but she knew that what she liked best was teaching the kids who had the most trouble, so she specialized in working with blind students  all over Monmouth County, New Jersey.

It was the late 1950s when Lynn and her husband decided to start a family. “In those days,” Lynn says now, her bearing solid as granite and billowing as clouds, “when a woman had children, she stayed home.”

She followed the rules, mostly. A beloved cousin happened to be adopted, and Lynn decided early on that adoption was for her. At a fundraiser for the Welcome House Adoption Center, founded by author Pearl Buck, a social worker introduced Lynn to a six-month-old Asian-American baby. Actually, she set the little boy on Lynn’s lap.
Six months later, he became Lynn’s first son.

A second son, a birth child, followed, and then Lynn’s daughter, a seven-month-old African-American girl adopted through the state of New Jersey.
“I could hear her screaming from miles away that day,” Lynn says. “I took her in my arms. She put her head my shoulder. She stopped crying. That was it.”

Forty years ago, the family moved to Londonderry looking to escape the selfishness and strange isolation of suburban life.

Lynn raised her kids. She marched against the Vietnam War. She marched for the Equal Rights Amendment. She made friends with the other feminist who lived in Londonderry.
One winter day in 1985, she was standing at the top of the stairs of a friend’s large, beautiful brick house. The friend had decamped to California for the season and asked Lynn to check the house for her.

“I was 50 years old,” Lynn says. “I stood there, and in my mind I put all the people I was angry at, including the people who wouldn’t let me play Little League, at the bottom of the stairs.

“And I told them off.
“And then, whatever it was inside me said, ‘Okay, Lynn, you are really angry. There is something missing from your life. Where are you going to be in five years? Are you going to be in the same place?’ And I dragged the typewriter over, and that’s where I started to write poetry.”

She wrote only scraps at first, images of pinched fingers, gates that wouldn’t open, windows that were shut. She was scratching out a voice for herself. A women writers’ conference gave her strength. An MFA in poetry through Vermont College gave her craft.

Her poems became extraordinary, plain in language, wild in image, daring in meaning, humane and quiet and brave.

“My joy is in giving voice to people who don’t necessarily have it, because that was my story,” she says.

Here’s another thing about Lynn Martin …

“I’m a quiet rebel,” she says. “At the AIDS Project, I opened and ran, without any big hoopla, a syringe exchange program for injection drug users, when that population became the one most at risk of HIV infection. This is what I mean about being quiet. There I was, a little grandmother, walking down Main Street, pulling a cart looking like I’m shopping, except the cart is filled with thousands of syringes and condoms!”

She laughs. Just like a poet, she is watching herself laugh, watching the light across the room, watching her memories and stories as they rise from inside. She talks in cadence. She lives in rhythm.

“I recently had three separate conversations about how the world is going to hell, how awful things are,” she says. “And I agree, there’s so much out there that is really hard.
“But I came home and sat here, and all of a sudden I looked up at these paintings and I thought, Where did they come from? They don’t come from the dark. They come from some light. And so does the poetry.

Here’s the thing about Lynn Martin:

She is grateful for her life, the truest act of the quiet rebel.

Becky Karush is a regular contributor to the Reformer. To suggest people for this column, write to her at reformer.ourneighbors@gmail.com.

Reprinted with permission from the Brattleboro Reformer.